Conserve Italia’s legal personality is that of an agricultural co-operative and is the mother company to other subsidiary companies in Europe: Conserves France, Juver Alimentación, Conserve Italia Deutschland, Mediterranean Growers and Tera Seeds.
The subsidiary companies are the results of acquisitions which have been carried out over last the 25 years.
Conserve Italia acquired Cirio and De Rica S.p.A. in September 2004 with 2 plants, one in San Polo (PC) and one in Caivano (NA), both sold after the merger and incorporation of Cirio De Rica S.p.A. in Conserve Italia (2007).
Conserves France S.A., with its 2 plants located in the South of France, specialising in the production of tomato based products, vegetables and sweet corn.
Juver Alimentación S.L.U., acquired by Conserve Italy 2003, with a plant in Murcia and is leader in Spain for fruit juices with the Juver brand.
Conserve Italia Deutschland in Germany, acquired in 1991, is the sales subsidiary for the German, Austrian, Dutch and Scandinavian markets. The company, in July 2010, changed its principal business activity, becoming a trading agency.
Mediterranean Growers Ltd, the UK subsidiary founded in 1983, covers Great Britain and Ireland. The company, in April 2009, changed its principal business activity, becoming an agency and or operating as contractor and service provider or as broker in food products.
Tera Seeds S.r.l. consortile was created in April 2009 for the production and sale of the seeds, pursuing the aim of developing a direct role in the management of seeds. It is controlled for 90% by Conserve Italia and for 10% by coop Agrintesa.
Conserve Italia USA Corporation and Conserve Italia Australia Pty Ltd are the new subsidiaries with the purpose to substain and develope the sales in USA and Australia.

The companies of the Conserve Italia group are co-ordinated strategically and operationally from the headquarters in Bologna (Italy) at all levels (Trading, I.T. and Logistics). 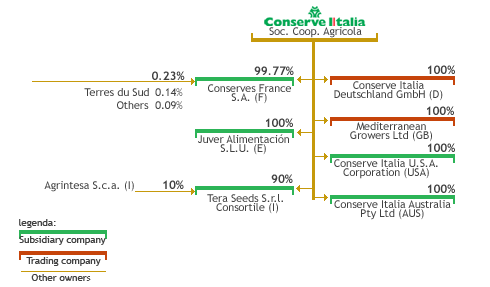