Co-operatives differ from corporations in that they are ‘man-centred companies’ in which human resources are a key and most valuable asset. In order to appreciate and value this characteristic, as well as to comply with the new legislation, Conserve Italia has implemented a Code of Conduct that expresses the commitments and moral responsibility that are imbued in the way the company conducts business, undertaken by those who hold positions within the company, are top managers, employers or staff that collaborate in various fields with the company. Conserve Italia’s Code of Conduct, which can be defined as the ‘Great Charter’ of correct corporate conduct, sets the main principles, guidelines, and fundamental norms and rules that everyone at the company- managers, employees and collaborators- are to observe and promote in their areas and to the extent of their responsibilities.
The rules contained in this Code do not replace but rather expand the main duties of workers already expressed under the provisions on personnel administration and management and in the national collective labour agreement implemented by the company. This Code of Conduct is based on rules and values that have always been the foundation upon which Conserve Italia’s business is built, from its very origins. Today these rules and values have been systematised in this new document that Conserve Italia commits to make observe by means of a dedicated Internal Control Committee. The corporate Code of Conduct ensures a ‘qualitative leap’ in the entire Conserve Italia System. At the same time, it is a powerful tool to raise awareness and provide a framework for all those who work in the name and on behalf of Conserve Italia, so that they behave honestly and irreproachably during the performance of their duties.
To sum up, this Code of Conduct is essential since it contributes to create the right work environment to build a modern and fair organisation model that clearly states which conducts are admissible and which are unlawful. The latter are strongly objected to by Conserve Italia since they are breaches of not only the law but also the ethical and social principles on which the company wants to build its co-operative mission.
The company has established a code of conduct for relations with suppliers within its Code of Ethics. 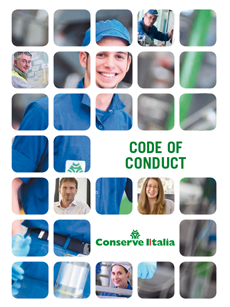